Whatever it takes: Thanks to you from Blue Raiders football coach

This statement became the overall slogan for the 2016 Blue Raiders Football Team: “Whatever it takes!”

Thirty-five years ago, I remember running down the alley behind the visitors’ side of the stadium to get …

Whatever it takes: Thanks to you from Blue Raiders football coach 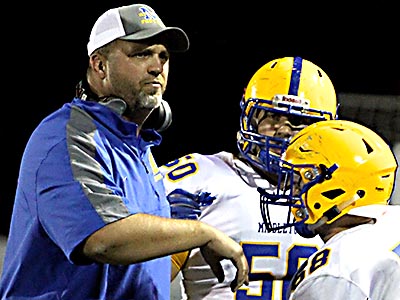 This statement became the overall slogan for the 2016 Blue Raiders Football Team: “Whatever it takes!”

Thirty-five years ago, I remember running down the alley behind the visitors’ side of the stadium to get into the gate. I dreamed of becoming a Blue Raider one day and playing in the stadium. That dream came true.

Then I dreamed about coming back home and coaching for the Blue Raiders. That dream came true. I never dreamed of what we as a whole have accomplished with the 2016 Blue Raiders football team.

As far back as I can remember the slogan “Whatever it takes!” has been a battle cry of this community. You came to every game and supported us. You cheered for us in the heat, rain, and cold. You made your presence known to opposing teams and to our team on and off the field.

For those of you who do not already know I would like to share the individual goals that each member of the Blue Raiders football team sets for themselves. As our community, you have helped our team to achieve some of these goals.

• Caring and giving back to community.

Because of your continued support, you have assisted in developing this team into the young men they desire to be. This community is helping to build strong men.

We often say the following to our players, “Let your action speak so clearly they can’t hear your words.”

The 2016 Blue Raiders football team and coaching staff would like to thank you for your support. Words cannot express how thankful we are as a team for your support and commitment this year. This past season will be a year to remember! With loyal fans like you, our team and community can accomplish anything! We would not have gotten as far as we did without the diehard fans keeping us going. Your dedication to this team is overwhelming and sincerely appreciated.

Ed O’Connor bashes the United States way too much: Letter to the Editor

Win for Librandi is best for economy: Letter to the Editor

Faith helps through TMI meltdown, documentary: Letter to the Editor

Rep. Mehaffie key to disability legislation: Letter to the Editor