A big splash in The Big Easy

In mid-May we took a family vacation to New Orleans. For my wife Maxine and I this was our second visit to the historic Louisiana city. We were there in March of 2006, just months after Hurricane Katrina wreaked …

A big splash in The Big Easy 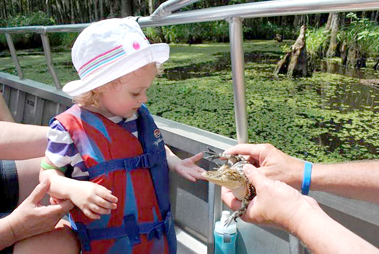 In mid-May we took a family vacation to New Orleans. For my wife Maxine and I this was our second visit to the historic Louisiana city. We were there in March of 2006, just months after Hurricane Katrina wreaked havoc on Louisiana and the other states along the coast of the Gulf of Mexico.

For our daughter Katie and son-in-law Troy the latest visit marked their fifth time there. Three-year-old Maya, my granddaughter, made her first trip to NOLA and enjoyed all of it. But it was the “big splash’’ that left the biggest impression on her.

The splash came on a swamp tour we took in midweek when Captain Mike, our playful Cajun guide, drove the flat-bottom boat directly into the wake of a passing boat, causing a blast of cool Pearl River water to fly over the bow and onto several of us who happened to be sitting in the first couple rows of seats.

Of course, the guy opposite me and I took most of the brunt of the flying water, drenching us from head to toe and hitting several others as well. Maya thought that was just too funny. Luckily it was a hot day, and we didn’t freeze.

Captain Mike hardly broke a smile, acting as if it was an accident. But he didn’t apologize. He turned out to be an excellent guide, very knowledgeable of the river, the swamp and the surrounding bayous.

We saw a number of alligators, several herons and egrets and a small group of wild pigs during our two-hour tour. Asked by one of the passengers if he watches “Swamp People” on TV, Captain Mike said, “No, because I am swamp people.” Quite a character.

In the city, we stayed at a hotel in the French Quarter a half block away from Jackson Square with St. Louis Cathedral as a focal point and the Mississippi River on the other side of the levee. Seeing the statue of the War of 1812 hero Andrew Jackson in the square reminded me of the old Johnny Horton ballad titled “The Battle of New Orleans” that he recorded in 1959. And I found myself singing the words in my mind a few times.

The hotel was very nice with spacious rooms, a pretty courtyard for sitting and a comfortable pool. Everyone was friendly and accommodating wherever we went. Much of the city has been rebuilt, but there is still a lot to be done. But the spirit of the people remains high and they really appreciate visitors.

Of course, the latest blow to hit the city involves the NFL’s New Orleans Saints. The league’s commissioner has dealt some very harsh punishment toward the team because of the alleged “Bounty System” involving Saints defensive coaches and players. Every day during our visit I read articles in the Times-Picayune about the charges and how the team must deal with the penalties and suspensions.

“Free Sean Payton” T-shirts were on display in many store windows, referring to the season-long suspension of the team’s head coach.

It will be yet another test of the strength and character of the city of New Orleans. No matter what comes out of the hearings and lawsuits from both sides, the local residents will still love “Dem Boys” and support the team while the latest crisis passes.

The city will bounce back like it always does because the good times far outweigh the bad times in New Orleans. Street musicians, artists, restaurants and attractions still highlight all that is good in a sometimes beleaguered city that refuses to give up. We actually got to see the Red Hot Chili Peppers filming a walking musical number for a video they were recording for their new CD.  Katie was the first person in the crowd who recognized Anthony Kiedis and “Flea” Balzary and got some decent pictures of the procession.

History abounds within the city and much can be learned on a carriage ride through the Quarter, walking tours and bus tours that pass by the historic cemeteries, the Superdome, Tulane and Xavier universities and through the Garden and Warehouse Districts.

Maya, with her curly blonde hair and terrific personality, was a big hit wherever we went, especially in the Camellia Grill where the men who worked and ran the eatery made a big fuss over her. She loved every minute of it and had even had her picture taken with them.

Every time we walked by the place the guys would smile and wave at her.

Still, it was the “big splash” that she loved the most.

Larry Etter can be reached at larryetter66@gmail.com

We are all in this together; let the local positive stories shine through: Editorial

In dealing with the coronavirus, listen to the experts and we will beat this: Editorial