The Donald, and why the hoity-toity pols hate him

Donald Trump and James E. Miller, right, backstage at FreedomFest in Las Vegas. "Don't ask how I got there,'' Miller said.

Rick Perry, the presidential aspirant and former Texas governor, recently bellowed this about Donald Trump at a …

The Donald, and why the hoity-toity pols hate him 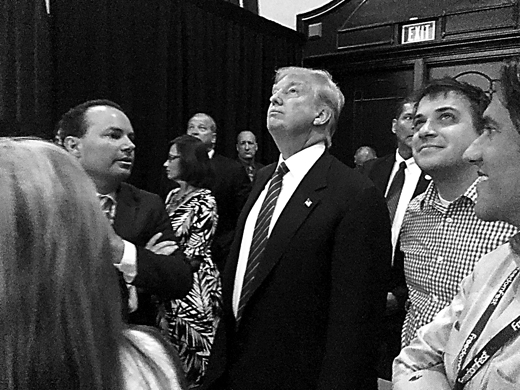 Donald Trump and James E. Miller, right, backstage at FreedomFest in Las Vegas. "Don't ask how I got there,'' Miller said.

Rick Perry, the presidential aspirant and former Texas governor, recently bellowed this about Donald Trump at a speech in downtown Washington, D.C.: "Let no one be mistaken, Donald Trump’s candidacy is a cancer on conservatism and it must be clearly diagnosed, excised, and discarded.”

“He’s becoming a jackass at a time when we need to be having a serious debate about the future of the party and the country,” South Carolina senator and fellow 2016 candidate Lindsey Graham told CNN’s Erin Burnett.

“The Donald’s life has been seven decades of buffoonery,” Kevin Williamson wrote in the conservative National Review.

In the vein of Rodney Dangerfield, Donald Trump, the mega-rich real estate mogul and unlikely presidential candidate, can’t get any respect. At least not from the hoity-toity political establishment that sits (or dreams of sitting) along the Potomac.

But out in the hinterlands – what D.C. elites call “flyover country” – Trump’s message and style are actually resonating. And the best part about the Trump phenomenon is that no one in the punditocracy can explain it.

D.C. journalists and talking mouths (heads implies they have a brain) are flabbergasted that a billionaire celebrity can go on stage and declare that illegal immigrants crossing over from Mexico are criminals and rapists, declare that an elder senator captured and tortured by the Vietcong is not a war hero, antagonize hecklers and opponents and still see his favorability ratings climb ever higher.

As the 4 Non Blondes once sang, what’s going on? Why is Trump lighting up the imagination of Republican primary voters? And why can’t the doofuses in red states, who worship a dumb book of fables and like shouting, “God bless America!” get in line and start voting Democrat?

Such rhetoric might seem extreme, but I’m guessing most readers don’t live and work in the nation’s capital. I do, and the Trump hate is real. It’s visceral, rage-filled and all over the lips of chattering Hill staffers at happy hour.

“He’s going to ruin the Republicans’ chances at the White House,” the GOP toadies whine. “I love Trump! He’s going to hand Hillary keys to the Oval Office,” go the social justice warriors.

I can’t help but smirk and nod my head at these presumptions. Trump is causing a national ruckus. He’s turned politics from a thinly-veiled beauty pageant into a full-blown talent show to see who is the most bombastic and absurd (maybe Trump is making up for his Miss USA pageant being canceled by Univision). And he’s driving the media insane, as they at once denounce his antics while feasting on the profits of clickbait articles they write about him.

Despite all these accomplishments, Trump has been most successful at one thing: It’s been the goal since Barry Goldwater’s candidacy for conservatives to show just how weak-kneed and spineless Republican leadership is, and Trump has done just that – he’s made it plainly clear that GOP leaders in Congress hardly justify their existence. The Republican Party is a pathetic cadre of big-talkers who can’t muster enough courage to slap down the most odious of liberal policies.

The big-dollar types can’t pull the reins on his tongue. He’s Bernie Sanders without the socialist tendencies. As billionaire investor Mark Cuban recently said, “I don't care what [Trump’s] actual positions are. I don't care if he says the wrong thing. He says what's on his mind.”

Just look at how the dopes in charge of the Republican Party have acquiesced to the opposing side. Obamacare is the worst, most heinous program ever? Republican honchos refuse to do anything substantive to end it. A Planned Parenthood doctor joked about selling baby’s organs to buy a Lamborghini? Senate Majority Leader Mitch McConnell won’t work to defund the baby-butchering organization. Veterans are dying en masse thanks to the wholly incompetent Veterans Administration? Republicans, who were partially in charge as the bureaucracy cratered, have done nothing to alleviate the plight of our soldiers.

And then there is immigration. Like him, despise him, or really despise him, Trump is bringing attention to a real issue America has neglected at the behest of the K Street lobbyist crowd. You don’t need a picturesque young woman shot down in California by an illegal immigrant to know that untrammeled entry into the country’s southern border is a problem. You don’t need reports that 80 percent of women emigrating to the U.S. from Central America are raped along the way.

So what do our enlightened despots in D.C. do? They refuse to budge. There is an unspoken pact between Washington elites and their corporate benefactors to not address immigration in any meaningful way. Big business wants cheap labor. The left wants more people on welfare rolls (and voting straight “D” every other November). Cowardly pols don’t want to address anything that might appear racist – the greatest, most unforgivable sin in modern America – and put their reelection at risk. So immigration goes undealt with.

When Trump goes out and says our country has a problem with illegal immigration, he attracts the spurn of Washington plutocrats, but also the support of folks sick of the raw meat they're fed from Congress. He speaks of a national greatness not felt in decades.

Back-to-back presidents have spent national treasure like drunk reprobates and have hollowed out our national resources through endless wars, endless spending, endless debt and endless neglect of the working and middle class. When Trump says he’ll drain the swamp of losers and cowards, why shouldn’t us little people believe him? It’s not like anyone else will do the job.

Granted, Trump’s remedies for our ailing country won’t cure the sickness within (his ideas about shoring up the entitlement state will further bankrupt us). But it hardly matters. Politics is about show, not substance. And The Donald is playing the part of the pugnacious underdog going glove-to-glove with the guys who have been in charge too long.

As liberal comedian Camille Paglia pointed out, “[Trump is] simply an American citizen who is creating his own bully pulpit.  He speaks in the great populist way, in the slangy vernacular.”

Trump doesn’t take guff from nobody. And that’s the way me and my fellow Americans likes it.

James E. Miller, a native of Middletown, is editor of the Ludwig von Mises Institute of Canada, a libertarian think tank, and works as a copywriter in Washington, D.C.