A teenager was charged with criminal attempted homicide after a stolen car he was driving rammed a Highspire police car during a high-speed chase on Saturday, June 22, police said.Tasai Betts, 17, of Harrisburg, was charged as an adult. He also … 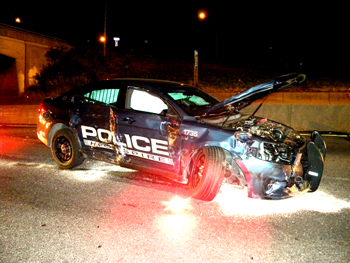 Submitted Photo- This Highspire patrol car was totaled in a crash during a high-speed chase with a suspect driving a stolen car, police said.Highspire police filed the charges with District Judge Kenneth Lenker’s office on Tuesday, June 25.
The car Betts was driving, a 2012 Hyundai, was stolen, and two handguns, drugs and drug paraphernalia were found inside, according to police.

Four other juveniles in the car, all from Harrisburg, could be charged with gun and drug violations, said Highspire police officer Ron Weber.

The accident occurred after Highspire police officer Jeff LeVan attempted to stop the car, which was driving erratically on Eisenhower Boulevard near the Pennsylvania Turnpike interchange around 3 a.m., police said.
Betts fled at speeds topping 75 miles an hour, police said.

Both vehicles careened into the center barrier dividing the northbound and southbound lanes. The five juveniles and LeVan were treated at a hospital for minor injuries, said Weber.

The juveniles were placed in detention by Dauphin County Juvenile Probation after they were released from the hospital. Betts was held in Dauphin County Prison in lieu of $25,000 bond. A preliminary hearing is scheduled for Friday, July 12 before Lenker.

Betts is facing charges of robbery with threat to immediate bodily injury and possession of a firearm from an unrelated incident on May 29.

Weber said LeVan put his life on the line, and his actions took a dangerous person off the street.
“He did a fabulous job,” Weber said. “The guy in pursuit tried killing him.”

The police cruiser involved in the chase was totaled, said Weber.

“It cost us a car, but it may have saved a life,” Weber said.