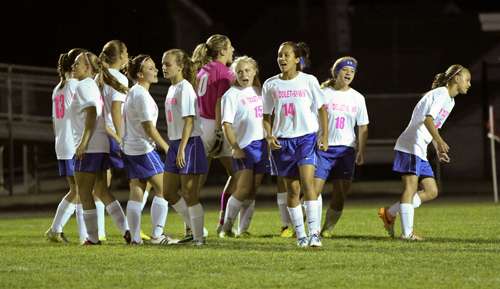 Goalkeeper Brooke Myers made 11 saves as the Blue Raiders (10-4, 7-3 in the Mid-Penn Conference's Capital Division) rose to eighth place in the Class AA power rankings. The top 18 teams qualify for the District 3 playoffs.

East Pennsboro avoided a shutout when Kassy Brown scored a goal in the 70th minute. The Panthers (10-4, 5-4) are in 12th place in the power rankings.

Katelynn Kennedy assisted on Nester's goal, scored in the 27th minute. Ulrich scored in the 52nd minute on an assist from Rowan Sessa.

The unbeaten Shamrocks scored a quick goal in the fourth minute, then held on to beat the Raiders on Thursday, Oct. 2 in Middletown.

Theresa Duke scored the lone goal on assists from Ashley Rogliano and Catheirne Gregoire. Shamrock goalkeeper Amanda Knaub made four saves to shut out the Raiders.

Myers made seven saves in goal for Middletown.