Following in the tracks set by their freshmen and varsity brothers, the Middletown Area High School junior varsity football team completed a sweep of West Perry with a 26-12 victory over the Mustangs on Monday, Sept. 29 at War Memorial Field. … 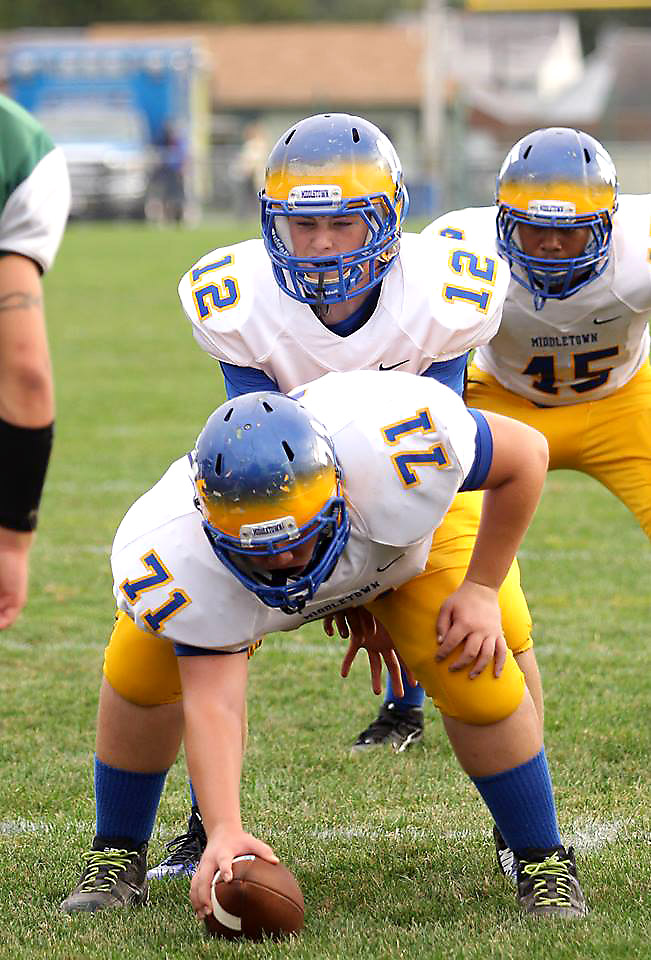 Following in the tracks set by their freshmen and varsity brothers, the Middletown Area High School junior varsity football team completed a sweep of West Perry with a 26-12 victory over the Mustangs on Monday, Sept. 29 at War Memorial Field.

Using a nice mix of a well-run offense and solid defensive work, the Blue Raiders jumped out to a 20-0 lead in the first half, scored again late in the third quarter and comfortably absorbed a pair of West Perry scores to claim the win.

A fumble recovery by Middletown's Jordan Jeffries on West Perry’s first possession of the game set the tone for what would follow.

Starting at their own 21-yard line following the recovery and a penalty, the Raiders reached the 47 on John Stoner’s 26-yard run. Five plays later, freshman Brady Fox went left on a sweep and outran the West Perry defense for a 42-yard touchdown that gave Middletown a 6-0 lead.

In the second quarter, back-to-back sacks by Middletown's Josh Brown on third and fourth downs set up the Raider offense at the Mustangs’ 38-yard line. On third-and-5, quarterback Chase Snavely threw a perfect pass to Fox, who was wide open down the middle, and the pair connected for a 33-yard touchdown completion. The pair hooked up again for the two-point conversion that gave the Raiders a 14-0 lead.

Devon Agramonte’s pass theft stopped West Perry’s next drive after the Mustangs had moved deep into Middletown territory at the Raider 11-yard line. After a penalty backed the team to the 6-yard line and another infraction wiped out a nice gain, the Raiders were facing a second-and-long at the 9 with time running out in the first half. Going back to what worked before, however, Snavely hit Fox on the exact same pass play as before, and the connection went for a 91-yard touchdown with 37 seconds left. The Raiders led 20-0 at the halftime break.

West Perry’s defense stopped the Raiders on the opening possession of the second half, and the Mustangs cashed in on a short field to score their first touchdown of the game, capping a 27-yard drive with a touchdown pass on fourth-and-goal.

The Raiders came right back on their ensuing possession. A pass to Abel Botterbusch, a grabbing-the-facemask penalty against the Mustangs and a pair of runs by Fox and Stoner set up Fox’s 22-yard scoring dash with 52 seconds left in the third quarter.
Credit goes to linemen Tre Michael, Dustin Holliman, Charlie Euker, Tony Colello and Brown, who keyed the drive.

After stopping West Perry’s next drive, the Raiders had one more chance to pad the lead, but their time-consuming march ended at the Mustang 1-yard line.

The Mustangs scored their final touchdown on an 89-yard pass play with 38 seconds left in the game.