Bey told the Press And Journal he is resigning effective Dec. 30 to accept a position as the full-time financial management superintendent … 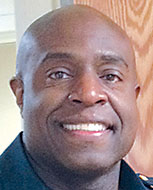 Bey told the Press And Journal he is resigning effective Dec. 30 to accept a position as the full-time financial management superintendent for the 193rd Special Operations Wing of the Pennsylvania Air National Guard, located at Harrisburg International Airport.

Councilor Diane McGlone called Bey’s resignation “unfortunate. He will be a tremendous loss to the police force and to our town.”

Bey “brought pride back to the police force and he also set the standards for the professionalism of local law enforcement” in the borough, McGlone said.

Mayor James H. Curry III was not available for comment. Council President Ben Kapenstein and Vice President Damon Suglia did not respond to requests for comment.

In his resignation letter, Bey said in part: “It is with a heavy heart that I am leaving this position as I’ve grown as a professional and as a person during my tenure.”

He also said in the letter: “It was a great privilege for me to work here for the past two years and I have learned a lot from my experience here. I would like to thank you all for working with me as a team.”

Bey came to the borough after retiring from 25 years of service as a Pennsylvania State Police trooper.

He has also been in the military since 1986 with the Air National Guard. Going from a traditional part-time National Guard airman to having a full-time position with the 193rd means that Bey will be able to increase his military retirement pay “exponentially” when he hangs up his uniform in about five or six years. Bey holds the military rank of chief master sergeant.

Bey also made it clear in an interview with the Press And Journal that he has always functioned better in a military-oriented environment, being that of the National Guard or in the State Police.

Becoming a police chief in a small town such as Middletown, where the chain of command leads through an elected civilian borough council as well as an elected mayor, has been a challenging transition where the chief no doubt at times has felt like a fish out of water.

Nor did it help that Bey came to a department crying out for some semblance of stability; the borough having gone through three previous police chiefs over the three years leading up to when the council hired Bey in August 2014.

The environment at the police department upon his arrival was “tumultuous” and “toxic” and the force was “on the verge of disbandment,” Bey said.

“I was able to come in and kind of calm things down, provide some direction, establish some policies, increase morale, instill some training and kind of settle the waters,” Bey said. “I think they are on good solid ground. Hopefully the next chief can take the stick and run with that and move forward.”

Bey said he does not know what kind of transition the borough will put in place after he leaves on Dec. 30.

“I’m very open to sitting down with them and helping them with any transition moving forward. Even if they want to bring me back and be part of the interview process I would gladly do that,” Bey said.

However, the force faces a significant challenge regarding a lack of supervision — which could make any upcoming transition period more problematic.

That is something Bey sought to correct and, while not wishing to “cast any aspersions” on borough government and council, he acknowledged it is one example of frustration over not being able to accomplish all that he wanted to.

“I tried to get sergeants promoted because you need that supervision. It’s not there. For whatever reason the council did not move forward” with promoting sergeants, Bey said. “I don’t know what the borough’s plan will be going forward.”