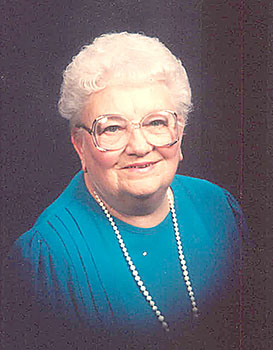 She graduated from Middletown High School. After graduation she worked at Reese’s Candy Factory until she married Lester William Laudermilch in 1935. He preceded her in death in 1980. After she started her family, she returned to the workforce at Howard Johnson’s on the turnpike where she worked for over 30 years.Until her physical condition prevented her, she was an active member of the Women’s Sunday school at Evangelical United Methodist Church, Water St., Middletown. She was also a former member of the Golden Agers.

She was preceded in death not only by her husband, but by her two eldest daughters Janet L. Meinsler and Donna L. Mullen, her son William T. Laudermilch, and her grandson Lynn C. Meinsler.

Her family will remember her lovingly and pray that she is enfolded now in the loving arms of those who passed away before her.

A Tribute to her life was held on Tuesday at the Matinchek and Daughter Funeral Home and Cremation Services, Middletown, with the Rev. James Dawes officiating.

Memorial contributions may be made to the Middletown Home, 999 W. Harrisburg Pike, Middletown, PA 17057.