Police charged Jonathan Paul Cobaugh, 30, with robbery threat, immediate serious injury for the holdup, as well as the same charge for a second holdup three nights earlier at the same Turkey Hill. 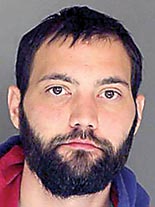 Cobaugh entered the store at 1:51 a.m. Oct. 24, confronted the store manager with a knife and left with the money from the cash register, according to the affidavit of probable cause.

James Romeo, store manager, then followed him to North 64th Street and helped police identify him, the affidavit states.

Cobaugh was caught in front of Rutherford Elementary School carrying $139 cash, according to the affidavit. Police said Cobaugh was missing a shoe at the time, which was located in the area where Romeo had last seen Cobaugh.

Romeo told police Cobaugh appeared to be the same person who held up the store at 1:43 a.m. Oct. 21.

Surveillance video confirmed that a man matching Cobaugh’s description and wearing all black clothing and a mask both times brandished a knife during the robberies, the affidavit reports. The store personnel reported $300 was taken in the Oct. 21 holdup.

Cobaugh is being held in lieu of $25,000 bail in Dauphin County Prison.

In addition to these incidents in Dauphin County, Cobaugh faces two counts of theft of services and one count of public drunkenness related to a Feb. 23, 2015, incident that occurred in Hampden Township, Cumberland Count