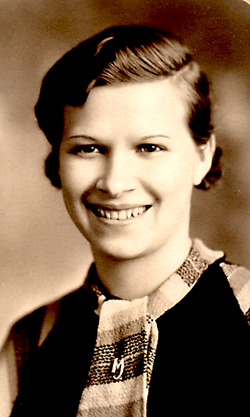 She was born on June 27, 1916 in rural Middletown. She was the middle of three children of
Clarence Brinser Good and Ethel Mae Alwine Good. Her siblings were Elizabeth Grace Good Wagner and Walter Clarence Good. She was preceded in death by her husband Richard H. Hartwell on August 3, 1998, and all of her immediate family.

She was a graduate of Middletown High School. On November 23, 1937, at Elkton, Maryland, Margaretta married Richard Hughes Hartwell, son of Philander W. and Ada J. Chapple Hartwell, and moved to Hummelstown. She was a lifelong seamstress at the former Rough Wear Clothing factory in Middletown where they made London Fog, Skaggerac, and “Chips and Twigs” fine quality outer wear. She sewed pilot leather jackets for our World War II pilots and outerwear for Explorers for their expeditions to the North Pole.

While Margaretta and Rich never had children of their own, they treated their many nieces and nephews as if they were their own. They did, however, always have two to three cats as “their own.” ‘Steam Train Rambles’ were frequent events, especially to Cass, West Virginia.  Margaretta was a life member of the Hummelstown Area Historical Society.

Interment will be in Hummelstown Cemetery.

Friends are invited to the viewing from 1 p.m. until time of the service on Thursday at the funeral home.

With revenue off because of coronavirus pandemic, MASD might increase taxes to balance budget