The Lions got a taste of things to …

hosted Wesley, one of this year’s Capital Athletic frontrunners, 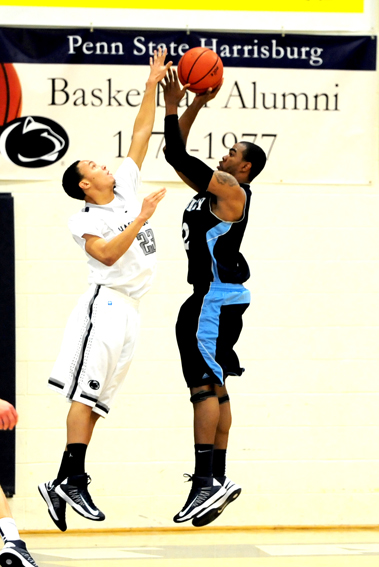 Penn State Harrisburg’s Joey Farthing (23), left, tries to block a Wesley shot.on Thursday, Nov. 29. The outcome, an 83-68 defeat, wasn’t the ideal result the Blue and White had hoped for heading into the contest.
But the big question on everyone’s mind of whether or not Penn State Harrisburg will be able to compete with its new league’s strongest competition come next year was answered.
Yes.
The Lions hung with the Wolverines well into the second half before the visitors used a crucial 17-4 run to put the game out of reach late.
Wesley had the edge in size and the Wolverines used it to their advantage in the early going with six of their first eight points coming off layups inside.
Penn State Harrisburg Coach Mike Gaffey used a timeout to settle his team down and his players responded nicely with 10-0 run out of the break.
The Lions took a 12-11 lead when senior captain Jordan Gatchell  knocked down a jumper at the 13-minute mark. The shifty point guard had the hot hand early on and scored all but two of the Lions’ first 12 points.
The score remained close as the first half drew to a close.
Wesley’s Rasheed Carter made a free throw to put his team up 23-16.  Sophomore Joey Farthing answered back with a layup to cut the deficit to five.
The Wolverines’ Devon Davidson laid one off the glass to push the lead to back to seven. Penn State Harrisburg junior Julius Brown pulled up at the foul line on the other end and hit a jump shot to make it 25-20.
After a Blue and White defensive stop on Wesley’s following possession, Gatchell connected on another jumper to bring his team to within three with 4:45 remaining in the first half.
The visitors responded nicely, however, and following a pair of foul shots by Penn State Harrisburg’s Ethan Strayer with 3:07 left on the clock, the Wolverines closed out the half on a 10-3 run and took a 39-28 advantage into the break.
The Lions fought back in the second half, cutting deficit to six points thanks to a trio of timely three-balls from Alberto De Los Santos, Will Doyle  and Strayer.
Unfortunately for the Blue and White faithful that packed the Capital Union Building for the Lions’ home opener, the home team went cold offensively following a De Los Santos layup at the 16-minute mark.
Wesley took full advantage, connecting on a flurry of field goals from beyond the arc and putting together the pivotal second half run that kept the contest out of reach from that point on.
The Wolverines hit 11 3-pointers on just 17 attempts to record an impressive 70.6 percentage the Lions just could not match.
Penn State Harrisburg’s tandem of Gatchell and Doyle led the way on this night. The senior was extremely efficient, going 7-11 from the field and 3-6 from downtown to tally a team-high 17 points. Doyle shot 50 percent from the field on his way to a 16-point night. Both young men swiped three steals.
Strayer netted a season-high 10 points and De Los Santos added 6.  Brown was the team’s leading rebounder with five while Farthing dished-out a game-high five assists.
Despite guarding bigger opponents all evening, sophomore forward Kevin Icker blocked a game-high two shots.
The loss dropped Penn State Harrisburg to 2-3 on the year. The Lions have yet to lose back-to-back games this season.