A Middletown man faces up to 159 years in prison after a Dauphin County jury convicted him on Monday,  Nov. 9 of raping a child and related sexual offenses.

Richard Omar Soto, 34, was brought to the attention of …

A Middletown man faces up to 159 years in prison after a Dauphin County jury convicted him on Monday,  Nov. 9 of raping a child and related sexual offenses. 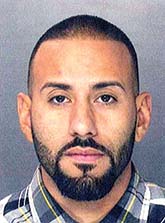 Richard Omar Soto, 34, was brought to the attention of authorities around Halloween 2013 by a tip from the victim’s elementary school teacher to the school’s guidance counselor.

The victim, a girl who was then 8 years old, had drawn a penis on a monster as part of a classroom art project. The teacher showed the drawing to the guidance counselor, and it was turned over to Middletown Police Detective Mark Hovan, who was assigned to the case, according to court records filed with District Judge David Judy.

Soto sexually assaulted the child in many different ways over a two-year period when she was ages 6 through 8, according to a press release put out by the Dauphin County District Attorney’s Office.

“This girl is one of the bravest people I have ever met,” Deputy District Attorney Abby Trovinger, who prosecuted Soto, said of the victim.

The girl’s mother was charged with endangering the welfare of a child for allegedly failing to protect the girl from further abuse by Soto after the girl told her mother of the abuse in mid-2013. The mother, who has pleaded guilty to the charge, testified in support of Soto during his trial.

The DA’s press release called the case a “prime example” of how the county’s Multi-Disciplinary Investigate Team investigates and prosecutes child abuse allegations.