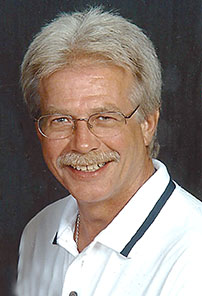 He was born on August 20, 1951 and was the son of Lois Slesser Brown and the late Robert Root.

He was an avid golfer and sports fanatic. He enjoyed reading and going to the beach, but his greatest joy came from spending time with his three girls. Jim was employed at Amphenol Intercon Systems where he was a production control manager. He formerly worked for Tyco, AMP, Inc. and Doubleday Book Co.

In addition to his father, Jim was preceded in death by his stepfather Joseph Brown and his father-in-law John J. Kovalic.

In addition to his mother, he is survived by his loving wife of 40 years, Jean Kovalic Root; two daughters Abbey J. Root of New York, N.Y., and Jessica L. Root of Middletown; one sister Patricia, wife of Dave McGowan of Nevada; one brother Richard, husband of Carmela Brown of Harrisburg; sister and brother-in-law, Kathy and Michael Semic of Middletown; nieces Amanda Semic of Middletown, Katelyn Semic and husband Christian Louer of Mississippi, and Emma Semic “The Midge” of Middletown; mother-in-law Doris M. Kovalic of Middletown; two uncles William and wife Daisy Root of Wilkes-Barre, and Donald and wife Phyllis Slesser of Massachusetts; one aunt Glori, wife of John Chaya of Arizona; numerous cousins; three four-legged friends Gizmo, Mr. Jynx and Tigger; and many loved friends.

A Tribute to his life will be held at 7:30 p.m. on Wednesday, January 15, at Matinchek and Daughter Funeral Home and Cremation Services, Middletown.

There will be a viewing from 6 p.m. until time of service on Wednesday at the funeral home.

Memorial contributions may be made to Seven Sorrows of the Blessed Virgin Mary Catholic Church, 280 Race St., Middletown, PA 17057, or to the Harrisburg Humane Society, 7790 Grayson Rd., Harrisburg, PA 17111.