After winning 15 games in each of the past three years, Chris Sattele, coach of the Middletown boys’ basketball team, would like nothing more than to keep …

But to do so, Sattele and varsity assistant Chris Bradford will need to put together a good rebuilding plan. 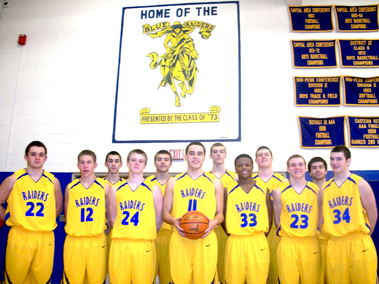 Gone from last season are six seniors, including four starters, who led the Blue Raiders to a berth in the District 3 Class AAA playoffs back in February. The top two scorers were also among the graduated players.
Last season, the Raiders lost in the first round of district play to top-seeded Lampeter-Strasburg after claiming a victory in the preliminary round at Big Spring.
“If we had won a couple more games in the season we would have gotten a better draw in districts and maybe extended our season a bit,” Sattele said.
Sattele does have one starter back for the new season in senior Trent Zimmerman, a division all-star nominee last winter. Zimmerman, a 6-foot-tall guard, was arguably the team’s best all-around player as a junior and scored 270 points, third best on last year’s squad. Understandably, Sattele will build this year’s team around Zimmerman.
The new Blue Raiders will be young, with just Zimmerman and two other seniors on the roster.
The other 12th-graders are Jared Truesdale, a 6’-1” forward, and Quentin D’Onofrio, a 5’-11” forward. Truesdale, who missed half of last season with an injury, will start and D’Onofrio will come off the bench.
Missing for the new season is a player Sattele hoped would be his starting point guard but who chose not to come out for his senior year. As a result, Sattele has had to adjust his plans accordingly. In the mix at the guard spots are juniors Dylan Danilowicz, Cody Fox and Levi Varner, each of whom played on the junior varsity squad last year. Varner and Danilowicz also saw some varsity time.
Sophomore Ladhellis Charleston also adds some depth at guard.
Without a doubt, the Raiders were big last year, but all that size is gone. However, there are a few athletes on the roster who are ready to step up and fill the gaps in the new season.
Nick Drawbaugh, a 6’-2”, 220-pound  junior, will man the middle on offense and defense, while classmate Mel Fager, 6’, will work the baselines. Also in the mix is Jeff Cleckner, another 6’ junior.
If this group can bring the ball up the court, run its offense cleanly and score points off high-percentage shots, the Blue Raiders could be successful once again.
“We’re going to play a lot of zone defense which will, hopefully, keep us in games,” Sattele said, adding, “We’re not going to be a high scoring team, so, if we can keep scores in the 40s with defense, we’ll have a better chance at winning.”
The Raiders did okay in a scrimmage at Conestoga Valley at the end of the first week of practice, but did not fare as well at Elizabethtown on Nov. 29, where turnovers and missed shots resulted in an unfavorable outing. Sattele and Bradford will work to correct those deficiencies by the start of the regular season.
With a tweaked realignment within the Mid-Penn Conference, the Middletown squad could be in the hunt for a division title, something that has eluded the program in recent years.  The Blue Raiders will compete in the Capital Division that includes Camp Hill, East Pennsboro, Milton Hershey, Northern York, Steelton-Highspire, Susquenita and West Perry. Old nemesis Trinity has moved to the Keystone Division.
“Steel-High and Milton Hershey will be the teams to beat,” Sattele noted. “I really believe we can compete with them and win against the rest of the division.”
The Raiders will tip off the season at the Annville-Cleona Tournament, a tourney they have won three years in a row. They will also have some tough non-division foes to face and will participate in the Susquehannock Tournament right after Christmas.
Matt Kleinfelter returns to lead the junior varsity squad and again will be assisted by Ron Stetler. They will work with the following players:  juniors Bobby Harper, Terry Love and Brad Phillips, sophomores Dagen Hughes, Kurt Dey and Zack Myers, and freshmen Osman Kamara, Brandon Harper and Caleb Leggore.
Charleston, Danilowicz, Varner and Cleckner will also get playing time with the JV squad.