By Jim LewisPress And Journal Staff

Though he studied all week, Zach Souders was nervous on the day of the Middletown Area Middle School Geography Bee. Not because he was unprepared. “I was nervous I was going to get something I knew … 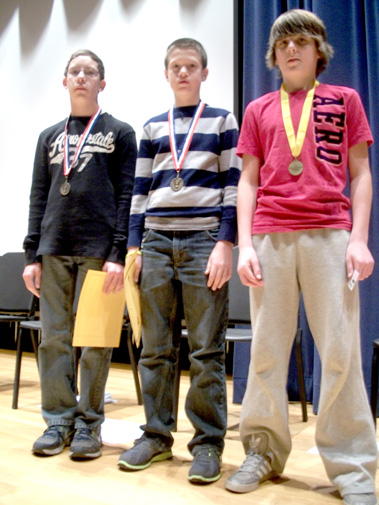 The top three finishers in the Middletown Area Middle School Geography Bee are, from left to right, John Hursh, third place; Tim Nevil, second place; and Zach Souders, first place.Souders answered the final question in the final round correctly to win the bee on Friday, Jan. 18 in the school auditorium, beating nine other finalists for the top prize.

He correctly answered that the island chain of Tierra del Fuego lies between Argentina and Chile, the final question of a three-question faceoff against second-place winner Tim Nevil. John Hursh finished third.

Ten finalists who earned the highest scores on a written test qualified for the finals. The other students in the top 10 were Donovan Brady, Jazmyn Cobb, Elion Favinger, Morgan Kennedy, Tommy Lee, Hunter Ortiz and Erin Templeton.