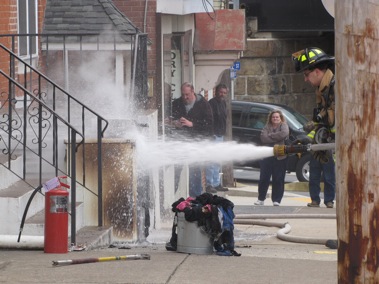 Firefighters battle a blaze caused when a dryer caught fire at 134 South Union Street in Middletown on Wednesday, March 13.No injuries were reported in a fire on Wednesday, March 13 at 134 South Union Street in Middletown that caused apartments to be temporarily evacuated and a portion of South Union to be temporarily closed.
The fire was contained and residents living in the apartments were able to re-enter later, according to deputy fire marshal Harry Cleland.
Middletown, Lower Swatara and Londonderry fire departments responded to the blaze, which Cleland said was caused by lint built up in a dryer.
Report an inappropriate comment