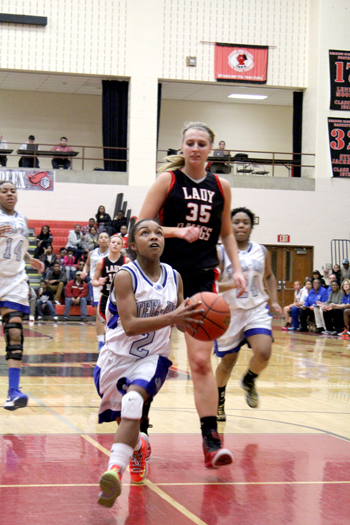 Photos by Noelle Barrett- Steelton-Highspire’s Jazmine Blanding (2) drives for a basket against Tri-Valley in a 73-72 loss to the Bulldogs in a PIAA state playoff quarterfinal.The Rollers led Tri-Valley by 1 point with just 11 seconds left in the game. Steel-High’s main obstacle in the game, 6-foot-4 Tara Nahodil, put the Lady Dawgs over the top with a basket with just 6 seconds remaining. A miss by Malia Tate-DeFreitas and Bulldog rebound sealed the Rollers’ fate.

Steel-High out-rebounded Tri-Valley, 44 to 27, a factor that usually means a Roller victory, said Coach Jeffrey Chisholm. But there were other factors that set the Rollers back during the game.

There was foul trouble. A lot of it. Tate-DeFreitas and Ceani Beaden ended the game with four fouls. Khadijah Robinson fouled out in the fourth quarter, an apparent blow to the Rollers’ defense.

While the Rollers racked up fouls, the Bulldogs took to the free throw line, hitting 16 of 26 free throws. Steel-High was 6-for-7 from the line.

Steel-High set the pace for the game, starting with a steal and 2 points by Blanding. Nahodil answered with a basket, and the lead yo-yoed back and forth between Steel-High and Tri-Valley for the entire game.

The Steel-High starters all chipped in points to help boost the Rollers to a 19-16 lead by the end of the first quarter, but that lead would quickly dissolve.

Blanding made a quick steal and got the ball to Robinson at the basket for 2 points, and Blanding slammed another basket for the Rollers to close the gap to 33-29. The Rollers would only get one more basket, a 3-pointer by Tate-DeFreitas, the rest of the half. The Bulldogs added 7 points for a 40-32 lead at intermission.

The lead was a little bit of breathing room for the Lady Dawgs, but not much. Steel-High rallied, putting pressure on Tri-Valley. Down by 10 with 5:55 left in the third, the Rollers went on an 11-3 run, with points by Tate-DeFreitas, Blanding and Amber Hess-Moore, and the Rollers trailed by 2 points, 49-47.

The Bulldogs responded, upping their lead to 57-51 by the end of the third quarter.

Steel-High recovered with a 14-5 run in the fourth quarter that put the Rollers on top, 65-62 with 3:16 left. Points by Tate-DeFreitas and Blanding helped get the Rollers close, and baskets by I’janique Simmons and Marlin Sanchez put the Rollers over the top. 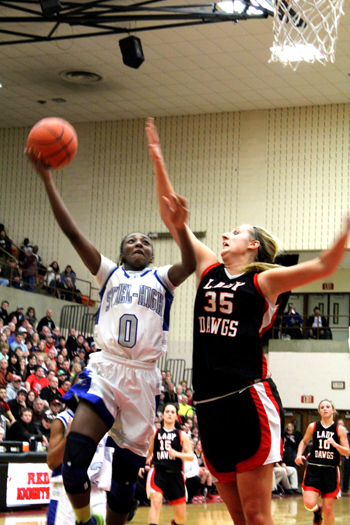 Steelton-Highspire’s Malia Tate-DeFrietas (0) led the Rollers with a game-high 38 points against Tri-Valley.The Rollers were up 67-63 with 2:42 remaining, but points from Nahodil tied the score, 67-67 as the game clock ticked down to 1:40, and free throws by Taylor Troutman gave the Bulldogs the lead again.

The Rollers wouldn’t let up, as Blanding grabbed a steal and basket to tie the game, 69-69 with 90 seconds left.

A basket by the Bulldogs gave Tri-Valley a 71-69 lead, but Tate-DeFreitas responded with a 3-pointer for a 72-71 Roller lead.

Then Nahodil hit her basket with just 6 seconds left, leaving the Rollers little time to make it happen. A miss by Tate-DeFreitas resulted in one last rebound.

It may have been the rebound to win the championship. The Bulldogs grabbed it.

Emotions were high when the buzzer rang. There were tears and hugs on the Steel-High bench and words of encouragement from the Steel-High crowd, muffled by the cheers from Tri-Valley’s side. 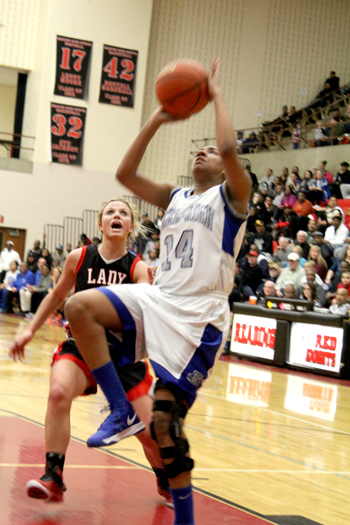 Steelton-Highspire’s Khadiah Robinson shoots a layup against the Tri-Valley defense.“We did pretty good trying to box out the big girl,” said Blanding. “We didn’t always keep our pace up ... overall, we did pretty good.”

“It is what it is. My hat goes off to Tri-Valley,” said Chisholm.

Sure there was sadness, but Chisholm remained proud of his team.

“They gave me over 100-plus wins,” he said. “I’m proud of Malia, Blanding, [Amber] Hess-Moore, Robinson. They had a very, very good year with the Rollers, a very good year.”

While the final play was tough to swallow, Tate-DeFreitas said she is moving on to the next level with no regrets.

“I had a good experience with the Lady Rollers,” said Tate-DeFreitas. “I wouldn’t change anything.”
And for Tate-DeFreitas, and a handful of seniors, Saturday’s game marked the last time they would step on the court as Steel-High players.

“This is really tough,” said Blanding. “I’m not an emotional person, but it’s tough to know that this is the last time playing with a Lady Rollers jersey on.”

“It was a lot of fun coaching Jazzy [Blanding, his daughter]. All of these girls are like my daughters. They are all family,” said Chisholm.

In the moments after the loss, all Chisholm could tell his Rollers was to look forward.

“I told them to keep their heads up. You played a very well game, and you have bigger things coming at you,” said Chisholm. “Right now, it’s a little emotional for me and the team. Once we get on the bus, we’ll pep things up and move on.”

The Rollers ended their season 25-5.