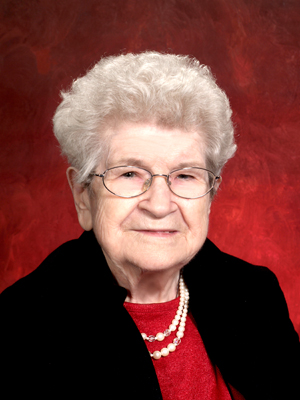 She was born May 9, 1924 in Koskovce, Slovakia, Europe, and immigrated to Pittsburgh at the age of 13. She was employed in the role of “Rosie the Riveter” for The Pittsburgh and Lake Erie Railroad, and various other jobs at Pittsburgh Screw and Bolts, Cheeseboro Ponds and Allis Chalmers.

She was an active member of Seven Sorrows Church in Middletown where she was part of the “God’s Housekeepers Crew,” a baker and cook for various activities, and a member of the Council of Catholic Women. She was known to clients and students at Progressive Enterprises Sound Studios simply as “Mother Trojcak” where they enjoyed her stories and European pastries.

In addition to her parents Martin and Mary Kovach, she was preceded in death by her husband of 50 years Andrew Trojcak on May 23, 2008, and a brother Martin Kovach.

Mass of Christian burial will be celebrated at 11 a.m. on Thursday, March 21 at Seven Sorrows Church, 280 North Race Street, Middletown, with Fr. Thomas Hart and Fr. Ted Keating as celebrants.

Internment will be at Middletown Cemetery.

Viewing will be from 7 to 9 p.m. on Wednesday, March 20 at the Frank E. Matinchek and Daughter Funeral Home and Cremation Services, Inc., 260 E. Main St., Middletown, with recitation of the Rosary at 8:30 p.m., and from 10 a.m. until time of service on Thursday in Seven Sorrows Church narthex.