An old sign stuck into a plot of green space on Adams Street, the site of a long-dormant revitalization project, reads, “Motivated and on the move for a better Steelton.” Since it was erected, early in the project’s life, some of the …

But though the project may appear to have been abandoned, it seems Steelton is once again “on the move.”
There wasn’t a quorum or a crowd, but Steelton Borough Council heard a presentation at a special meeting on Tuesday, July 30 about an opportunity to bring affordable housing to that bare piece of land.

The project has been several years in the making. Originally, the borough razed properties that previously sat on the land, hoping it would entice developers to build. 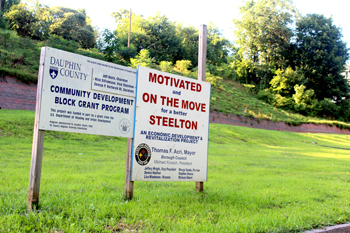 Banuelos said the plan “got stuck for a number of reasons,” and developers shied away. It was a hard time in the country for real estate, and the price to build exceeded the price to sell property, he said.

If council votes to transfer the Adams Street property to the nonprofit, funding can come from a number of sources, including grants and donations, something a private developer couldn’t obtain, said Banuelos.

The initial concept was to build 10 townhouses, but that idea will be re-evaluated to see what will be most beneficial.

“Right now we have a clean slate,” Banuelos said. “Whatever we can build a little cheaper … is what we’ll propose.”

That could mean townhouses or single-family dwellings.

While nothing is set in stone, the buildings will likely be three bedrooms, with 1½ bathrooms, between 1100 and 1200 square feet, and “extremely affordable for workforce families,” Banuelos said.

There will also be some restrictions. The homes can only be purchased by people who earn 80 percent of the area’s median income or less.

“When the properties were acquired, the money used to demolish them was through CDBG [Community Development Block Grant],” said Sara Gellatly, borough manager. “That’s what put restrictions [on the property].”
Council members in attendance seemed supportive of the project, as was Mayor Tom Acri.

“Council would be foolish not to proceed with this,” Acri said.