Newness is the theme in the Middletown Area School District sports landscape this fall –new head coaches in football, field hockey and boys’ soccer, some new athletes, and even some new practice fields being built for future use during the … 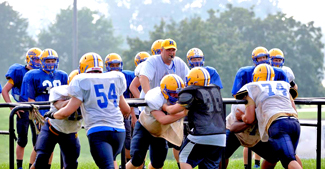 Photo by Bill Darrah Brett Myers, Middletown’s new football coach, leads drills on the first day of practice with pads for the Blue Raiders. The event will be more of a “night out” for the community than a pep rally, King said, and will feature all fall sports teams, serving as a reminder that there are exciting teams to follow throughout the Middletown sports landscape beyond just football.

“It’s a nice way for all the athletes to be on the same field as the other athletes,” King said.

Another “big part” of the event will be the conclusion of the Fill the Bus campaign to collect school supplies for children in need in the district, King said.  The Middletown Blue Wave Marching Band will also perform throughout the event.

Most of all, “Meet the Raiders” is for the community that supports Raider athletics to get to know the athletes, and King encourages all who bleed blue and gold to attend.

“The success of our sports programs relies on the support of our community. The more support we have, the better atmosphere for competition we have.”