Enlightened Elves -- The Wednesday, Dec. 22 St. Peter's Nursery School Christmas program at St. Peter's Lutheran Church in Middletown was the perfect expression of what Christmas means, especially to the young. The children, dressed as elves - and … 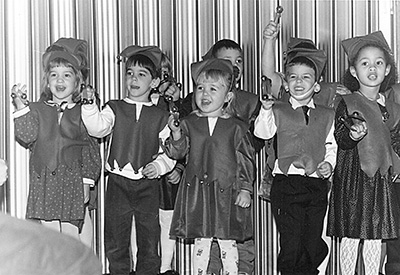 Enlightened Elves -- The Wednesday, Dec. 22 St. Peter's Nursery School Christmas program at St. Peter's Lutheran Church in Middletown was the perfect expression of what Christmas means, especially to the young. The children, dressed as elves - and with eyes filled with holiday expectations - performed flawlessly for family members, churchgoers and guests.

From The Wednesday,
December 28, 1993 Edition Of The Press And Journal

For the fifth consecutive year there will be no tax increase in Lower Swatara Township.

Lower Swatara’s Board of Commissioners, by a 4-0 vote, passed a $1.8 million budget for 1994 at its December meeting.

“I’m very happy,” said Frank Linn, president of the Board, following the vote. “Thank the finance committee, the fifth year the Township has not raised taxes. I’m hoping it continues that way.”

The real estate millage will remain at 2.64 mills. In a budget summary prepared by Dr. David Clouser, Township Manager, he wrote, “In summary, real estate taxes make up 35 percent of the revenues; Act 511 taxes like per capita, occupation, property transfer taxes 38 percent, and building permits and business licenses 6 percent. The remainder of the revenues comes from interfund transfers, state entitlements, fines, interest and rents for another 21 percent. The total revenue will be $1,875,005.

Early in the budget summary Dr. Clouser wrote, “The many demands for increased services with only modest growth in 1993 have required the Finance Committee to make difficult decisions. The budget process has been an open one, with each group and department head having their considerations listened to by the Board and Finance Committee and, where appropriate, incorporated into the budget.”

“The year 1993 has been an eventful year. Keith Condran was appointed as public works superintendent in October 1993. A safety committee was formed in October to help work toward a one-time 5 percent discount on workman’s compensation premiums. The staff has representatives from all departments, including the Fire Department and EMS, serving on the Safety Committee.”

What started out as a mere activity to prepare for a career in law enforcement has evolved into a serious hobby for Art K. Leinbach.

Leinbach, the son of Kenneth R. Leinbach of Middletown and Sujin Healy of North Carolina, never gave weightlifting a thought when in high school. But the 1982 Middletown Area High School graduate did give it some thought two years after graduating, but only as part of his preparation for a career with the Pennsylvania State Police.

The preparation paid off. Leinbach landed a job as a state trooper and went on to compete in a host of weightlifting events, racking up an impressive list of titles along the way. The first came in 1988 when Leinbach placed third in his class at the Greater Harrisburg Amateur Athlete Union (AAU) competition, held that year at MAHS. In 1990, it was Mr. Pennsylvania (AAU), short class, and then it was runner-up in the middleweight class of the 1993 Mr. Universe (AAU).

Garning a total of 11 accolades from 1988-1993, Leinbach’s most recent feat was taking third place in the Mr. Natural Musclemania competition held in California, Nov. 18-21.

Now, the 171-pound weightlifter has his sights set on next year’s North American Championship to be held in August in Mexico City, Mexico. Though Leinbach has competed in other national meets, this would be the first time he would be competing in a meet sponsored by the National Physique Committee. It is the only organization, which a weightlifter can turn “pro” through, Leinbach explained.

Asked if that was his goal, Leinbach replied, “Maybe, but I have to be realistic, the competition is tough, very tough. At this point, it is still a hobby form me.” Pro or hobby, Leinbach remarked that weightlifting is a very demanding sport, requiring tremendous self-discipline.

Elizabethtown officials are warning area residents about sales reps for an out-of-town firm who are using “highly questionable” practices in their efforts to sell specialized water purification services to local consumers.

The warning was first disclosed last Thursday night at Council’s regular meeting, a meeting that also witnessed the presentation of several official “certificates of appreciation” to residents who recently distinguished themselves by commendable acts of service to their community.

Turning to the flip side of the behavior coin, Council was advised that sales agents for Susquehanna Valley Water Specialists, Paxton St., Harrisburg, have reportedly been preying on consumer fears about possible contamination in water furnished by the Elizabethtown water system.

Borough officials said agents for the Harrisburg firm have been soliciting local water consumers in an effort to promote the sale of the company’s services. They said the agents have placed “free test kits” at the door of many homes in this area in an effort to solicit business.

“Most of these sales representatives haven’t even bothered to obtain the necessary permits to solicit in the borough,” Peter Whipple, Borough Co-manager, said on Monday.

That violation has been compounded by the representatives’ alleged misrepresentations about the quality of water supplied by the Borough system, which continues to earn some of the highest marks for any municipal water system in this state.

Recent test conducted by Wright Laboratories of Middletown for State Department for the State Department of Environmental Resources (DER) show that the levels of all known  contaminants in the Borough water supplies are far below maximum standards set by DER.