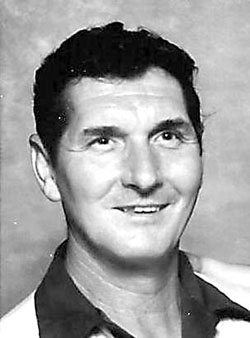 He was a World War II veteran of the United States Navy and he served in the Pacific Theatre; he retired as a cataloguer from Marine Corps Supply in Philadelphia and previously worked at Olmsted Air Force Base in Middletown; was a member of Parkview Church of the Brethren in Burnham, Pa., and the McVeytown Lions Club; and was a volunteer for the McVeytown Fire Police and was an EMT for McVeytown Ambulance.

He was preceded in death by three brothers John E., James O., and Richard D. Stine, and a half brother Kenneth Long.

He is survived by his wife Joyce I. Meyers Stine, whom he married on July 24, 1948; two daughters Diana S. Tanner and husband, Thomas, of Albuquerque, N.M., and Judith A. Stine of Middletown; a brother Leonard E. Stine and wife Rose of Elizabethtown; five grandchildren Julie A. Miller and husband Ed, Emily S. Castillo and Allena J. O’Neil, all of Middletown, Aaron W. Tanner of Albuquerque, N.M. and Amity A. Tanner of Philadelphia; five great-grandchildren; and one great-great-grandson.

A viewing will be held from noon to 2 p.m. Wednesday at the funeral home.