Veronica “Vera” Shimko Barnoski, 91, of Middletown, passed away on Sunday, November 10, at Frey Village, surrounded by her loving family. 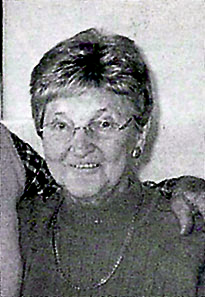 She would have been 92 on November 22. She was born in Larksville to John and Veronica Shimko, and was the wife of Charles Barnoski who passed away in 2012 after 70 years of marriage.

Years ago she faithfully visited her friends as Frey Village with candy treats. She also liked bingo, puzzles and watching sports.

In addition to her parents, husband, two sisters and a brother, she was also preceded in death by a granddaughter Joanne Sellers.

In addition to her brother John Shimko of Florida, she is survived by five children and their spouses, Barbara and Ron Sellers of Lancaster, with whom Vera lived this past year and a half, Dr. John and Julie Barnoski of Stone Harbor, N.J., Richard and Debra Barnoski of Middletown, Anne Marie and Charles Pringle of Harrisonburg, Va. and Mary Alice and William Vorderbrueggen of Cincinnati, Ohio; 11 grandchildren; and 10 great-grandchildren.

Viewing will be from 6 to 8 p.m. on Thursday, November 14, at the Frank E. Matinchek and Daughter Funeral Home and Cremation Services, Inc., 260 E. Main St., Middletown, with the recitation of the Holy Rosary at 7:30 p.m., and from 10 a.m. until time of service on Friday in the narthex of the church.

Pa. grocery store throws out more than $35,000 in food after woman purposely coughed on it

A sign of progress on coronavirus? For first time, Pennsylvania's new cases are fewer than day before