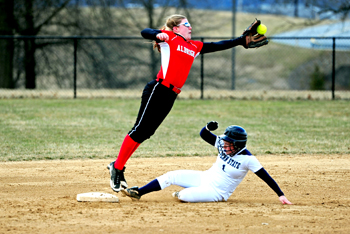 Penn State Harrisburg watched Stevenson’s offense get going early and often, and the Mustangs swept a doubleheader from the Lions, 8-2 and 7-1 on Sunday, March 24 in Owings Mills, Md.

Game number one saw Penn State Harrisburg (3-11) load the bases in the top of the first before failing to score. The Lions put a player in scoring position in the top of the second as well but again could not bring her in. These missed opportunities proved costly in the end.

In the bottom of the third, the Blue and White got two quick outs but the Mustangs (10-6) put together a two-out rally that included a three-run home run and resulted in three hits and a 4-0 Stevenson lead . . .

You can read the full story in our printed edition or our e-Edition.