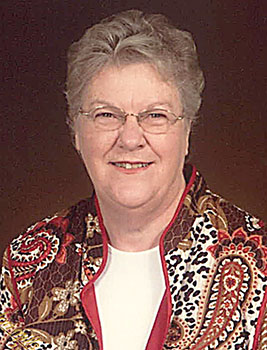 Joan M. Klahr, 70, of Mills, Pa., and formerly of Middletown, entered into rest on Thursday, February 13, after a courageous battle with cancer, at Cole Memorial Hospital, Coudersport.

She was born in Harrisburg on September 7, 1943 and was the daughter of the late Gerald and Gladys Roberts Yocum.

She was a graduate of Lower Dauphin High School class of 1961; was a former secretary for Moffitt Heart and Vascular Surgery, Harrisburg; was a member of Pine Creek Valley United Methodist Church, Gaines, Pa. and a former member of Middletown First Church of God; and she was a volunteer at the church, nursing homes, and was an avid reader.

She is survived by her loving husband of 49 years, Kenneth N. Klahr; son Andrew J. Klahr of Middletown; daughter Kendy Klahr, wife of Christopher Hinkel of Harrisburg; brother James A., husband of Joan Yocum of Arlington, Va.; and sister and brother in-law Kaye and Norman Riggleman of Elizabethtown.

A Tribute to her life was celebrated on Tuesday at First Church of God, Middletown.

Visitation will be from 10 a.m. until time of service on Saturday at her church in Gaines.

In lieu of flowers, memorial contributions may be made to Pine Creek Valley United Methodist Church, 761 Route 6, Gaines, PA 16921.

Arrangements are being handled by the Matinchek and Daughter Funeral Home and Cremation Services, Middletown.