Photo by Noelle Barrett Steelton-Highspire quarterback James Warren (3) fights off a York Catholic defender during a run. The Rollers have done it again. 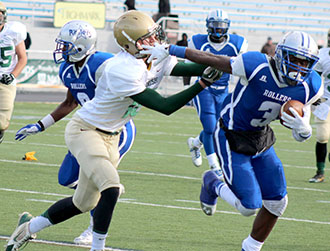 Photo by Noelle Barrett Steelton-Highspire quarterback James Warren (3) fights off a York Catholic defender during a run. The Rollers have done it again.

For this batch of Rollers, the district championship was a first – the most recent title was in 2008. It was also redemption: One year ago, Steel-High battled in the same stadium, on the same day, but was defeated by Delone Catholic, 28-13.

As Steel-High Coach Tom Hailey said, the team is “getting back to Roller football.”

The start of the game was just that.

It took the Rollers only three plays to score on their first possession. Quarterback James Warren ran the ball 37 yards down the left sideline for a 7-0 lead with 7:29 left in the first quarter.

The Rollers then forced a three-and-out, regaining possession at their own 24-yard-line. But that’s when things got a bit unstable. As the Rollers approached Fighting Irish territory, they fumbled, turning the ball over to York Catholic with 2:55 left in the quarter.

An encroachment penalty by the Rollers handed the Irish a first down – but three plays later, the ball was back in Steel-High’s hands.

You can read the full story in our printed edition or our e-Edition.{jcomments on}