Big, talented Beaver Falls did what no other team could do this year.

Playing for the state 3A championship title at Hersheypark Stadium on Saturday afternoon, the Tigers handed the Blue Raiders a 30-13 loss, halting Middletown’s …

Big, talented Beaver Falls did what no other team could do this year.

Playing for the state 3A championship title at Hersheypark Stadium on Saturday afternoon, the Tigers handed the Blue Raiders a 30-13 loss, halting Middletown’s unbeaten streak at 14 games and ending what had been a phenomenal season for the Raiders. 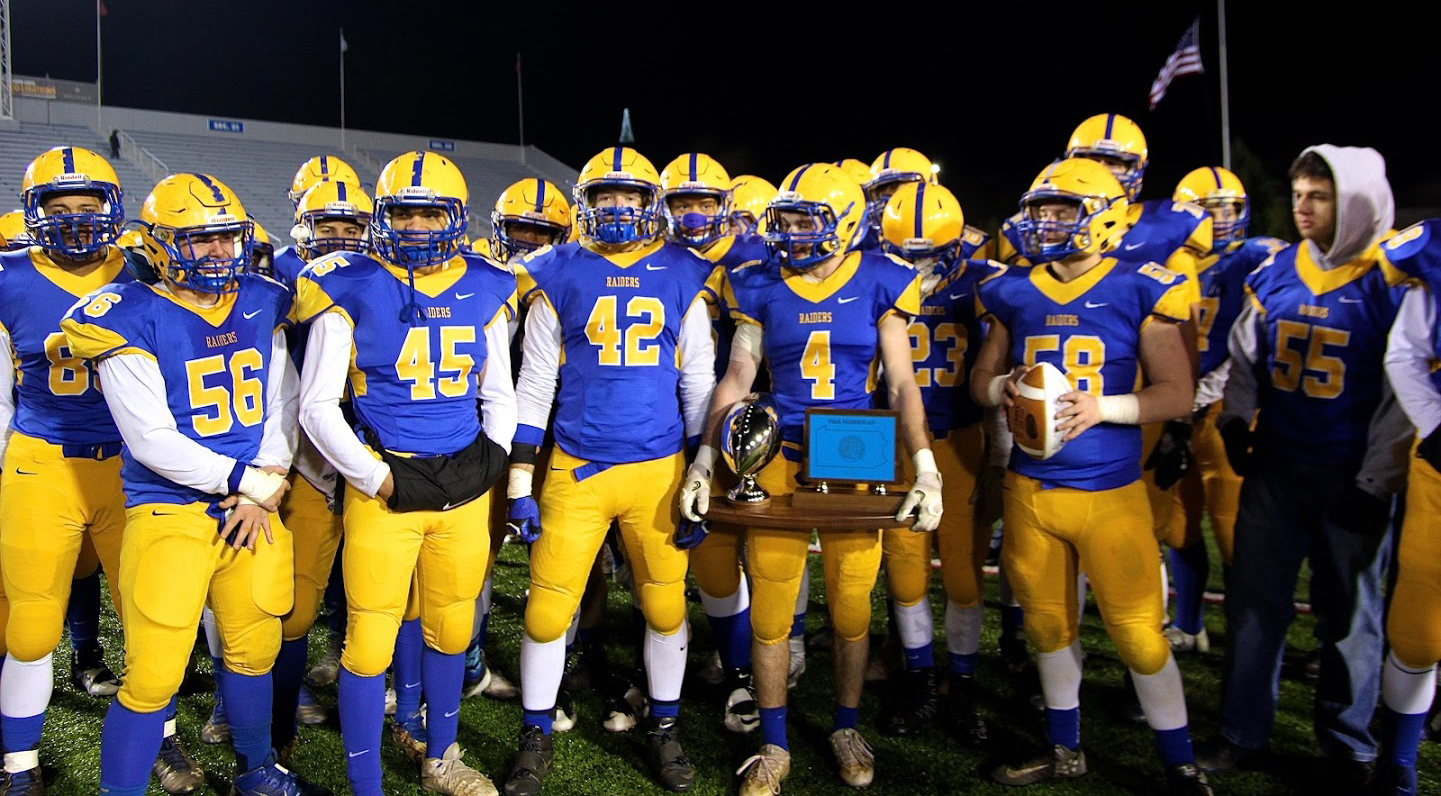 The Middletown Blue Raiders hold the state runner-up trophy on Saturday after falling to Beaver Falls in the state 3A title game at Hersheypark Stadium. (Photo by Jodi Ocker)With several Division I prospects in its lineup, Beaver Falls’ defense turned out to be as good as advertised in this battle between a pair of teams each making their first appearances in the title game. While the winner’s defense was turning in a championship performance by nearly shutting down the Blue Raiders’ high-scoring offense, the Middletown defense was equally impressive despite the 30 points on the scoreboard.

The game and the title were up for grabs with the outcome in doubt through three quarters and several minutes into the fourth. The Tigers, however, scored twice in the game’s final 10 minutes to lock up the win and claim the coveted state trophy. Although disappointed with the end results, the huge Middletown crowd watched their beloved team fight right to the end, cheering on the Blue Raiders until the time ran out on the historic season.

Pushing aside periods of power struggles and political issues during the recent past, the citizens of Middletown, Royalton and Lower Swatara Township all came together as one big family, joining forces for the common cause of supporting the boys in blue and gold who proudly represented the Middletown Area School District. And the loyal fans loved every minute of the season. With Mid-Penn Capital Division, District III-A and second place Pennsylvania state trophies in its possession, the football team has much of which to be proud.

So, too, does head coach Brett Myers, who in four years, took the program from the bottom level to the top tier in conference play. While he felt the pains of the loss in the season finale, Myers was still full of praise for his players and coaches.

“Middletown is a special place with special kids. They are proud kids who walk with their heads held high and I expect them to do the same now,” he said following the loss. “We’re 14-1. With a great group of kids like this, you just hate that the seniors have to leave with a loss. I just wish I could have helped them more.”

The Middletown defense, which Myers said played phenomenally, kept the Raiders in the game throughout. After giving up a Beaver Falls touchdown at 7:01 of the first quarter, the unit recorded a shutout during the balance of the opening half. The touchdown was set up by the Tigers’ first of five pass interceptions that gave Beaver Falls a short field at the Middletown 23. Neshaud Akins scored from two yards out on the Tigers’ sixth play to take a 7-0 lead.

The Blue Raiders answered with a touchdown on the ensuing drive. Aided by a pair of Tiger penalties and a 10-yard pass from Chase Snavely to Tyreer Mills, the Raiders gained a pair of first downs before a sack of Snavely cost the offense 9 yards. But the Raiders shook off the setback when Snavely hooked up with Brady Fox on a well-executed screen pass that went 33 yards to the end zone for the six-pointer. The extra point try missed, however, and Beaver Falls held the lead at 7-6 with 4:45 left in the opening period.

There would be no further scoring in the first half.

Beaver Falls reached the Middletown 22 on its next offensive possession before Tre Leach dropped quarterback Malik Shepherd for a loss on third down and Kyle Truesdale knocked down Akins 4 yards behind the line of scrimmage on fourth and four. Three plays into the second quarter, Leach appeared to gain a first down on third and 7, but the ball was marked short and the Raiders gambled on fourth and inches. The sneak by Snavely went nowhere and the Tigers again had the ball.

Starting at the Middletown 38, the Tigers were stuffed by the Middletown defense on back-to-back plays by Bob Graham and Jonah McCoy. The Tigers picked up 8 yards on third down but a fourth down pass fell incomplete and the Raiders took over at the 30. A lost fumble on Middletown’s first play gave the ball back to Beaver Falls at the 28. After the Tigers picked up a pair of first downs and earned a first and goal at the 2, the Raiders’ defense, led by Hunter and Haden Landis, Tristan Maxwell, Blake Jacoby and Graham, came up big again.

A fumbled exchange cost the Tigers four yards on second and goal and a gang of blue-clad Middletown defenders stopped Shepherd at the three on third down. One play later Truesdale sacked Shepherd at the 9 to kill the threat.

Middletown’s running game, a strength of the team all year, simply never got started against the Tigers front line that included Donovan Jeter (6 feet 4 inches, 260), Matt Gandy (6-5, 315) and Raquan Crowder (6-4, 310) and the Raiders had to punt. The first half ended with the Tigers hanging onto their 7-6 lead.

A partial block of a Middletown punt four plays into the third quarter changed the score, however, when Shepherd ran through the middle of the Raiders defense for 34 yards on second down. The extra point try missed but, with 8:59 left in the third, the Tigers led 13-6. With the defenses controlling the flow, the score remained unchanged until Beaver Falls’ Cody Long made a 20-yard field goal with 1:03 left. The kick increased the Tigers’ lead to 16-6.

But the Blue Raiders answered with one of their patented big plays. Following a 23-yard kickoff return by Mills, the Middletown offense was back in action at the 31. On first down, Snavely threw a perfect pass to Jaelen Thompson who was streaking down the left sideline. Taking the throw in stride in Tigers territory, Thompson outran a pair of Beaver Falls defenders all the way to the end zone for a 69-yard catch-and-run touchdown. Donovan Brady’s PAT pulled the Raiders to within three, 16-13, with 45 seconds left in the quarter.

That important touchdown, along with the defense’s stop that forced a short Tiger punt that went out of bounds at the Beaver Falls 40, gave the Middletown team a much-needed lift. But the momentum was short-lived. On fourth-and-3 from the 33 the opportunity was wrecked when Shepherd sacked Snavely for a 9-yard loss. Two plays later, Derrell Carter broke away on a 53-yard scoring run that pushed the Tigers back up to a 10-point lead, 23-13, with 9:29 left in the game.

Beaver Falls’ defense caused further damage to Middletown’s championship plans with three straight plays following the kickoff. On first-and- 5 Snavely was sacked again for a 10-yard loss by Jeter and Dalton Cleckley. A second down pass was batted down by Jeter and Snavely’s next attempt was picked off by Akins. The defense held and the offense had just 5:45 left to try to get a quick score. But another Snavely pass was intercepted two plays later, this one returned 46 yards for a crushing touchdown by Shepherd.

Snavely completed a 5-yard pass to Chris Plummer on first down following the score, but yet another sack by the Tigers, followed by another interception locked up the win for Beaver Falls.